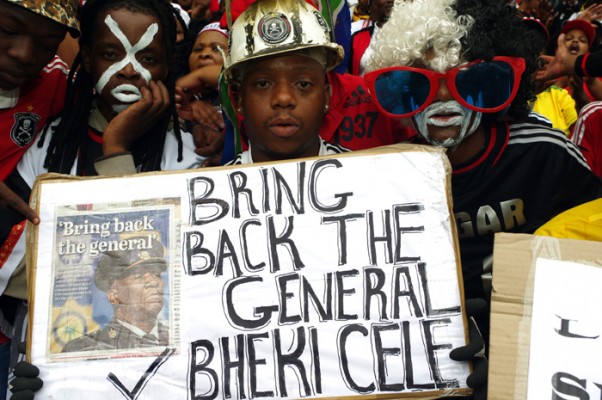 NOTE: Article first appeared on The Citizen website on November 4, 2014.

A crime prevention campaign launched by the ANC Youth League Tuesday, doubled up as a platform for the ‘bring back Bheki Cele’ campaign.

Bheki Cele, now deputy minister of agriculture and fisheries, was invited by the ANCYL in his capacity as an ANC national executive committee member. The event, hosted by the youth league, saw ‘Operation Wanya Tsotsi’, a call to reclaim the streeta being launched.

The crowd erupted when Cele, dressed in all black with a signature hat, entered the Vosloorus Civic Centre. A group shouted “bring back Bheki” when a question on how to fight crime was asked.

Cele called on the youth to channel the anger the country has over crime to start fighting it. “We must organise to close and squeeze the space for criminals”.

He added that communities should come together to expose criminals. “You know these people. Criminals like to talk about their loot, their money and their girls but you choose to keep quiet.”

Cele’s attendance was seemingly in line with the call from aggrieved fans who asked for the former police commissioner to be brought back to fight crime. ​The informal campaign was trending on social network Twitter under the hastag #bringbackbhekicele last week:

#BringBackBhekiCele the General did his job very well, the whole building issue can't stand over the fact that crime rates where decreasing

my @SAPresident, why is it so important to DA_News & its media sponsors that you disregard this groundswell plea to #BringBackBhekiCele?

Bheki Cele was not called Ndosi for nothing. It was the effectiveness in crime busting he had on the streets #BringBackBhekiCele