NOTE: Article first appeared on The Citizen website on November 12, 2014.

A truck driver accused of three counts of culpable homicide appeared briefly in the Palm Ridge Magistrate’s Court on Wednesday.

Isaac Maruding, the man who was driving the truck that caused a huge crash on the N12 in Alberton last month, has had his bail extended after a postponement.

Maruding appeared wearing all black, a change from the dirty overalls he was wearing before. Today magistrate, Samuel Hlubi allowed for his case to be postponed and moved to regional court when he reappears on January 23, 2015.

It was revealed that Maruding’s private attorney, Mokhele Salemane, has withdrawn since he secured R7000 bail for his client. A withdrawal state prosecutor, John Ntuli, called Salemane “unprofessional” as the court was only informed Wednesday by the accused.

The postponement was granted to give Maruding time to yet again find a new legal representative.

Three people died when the truck Maruding was driving ploughed into cars stuck in traffic on the N12, damaging 48 cars. Maruding fled from the crime scene – something the state previously argued made him a flight risk.

Maruding is facing charges of culpable homicide and reckless and negligent driving.

He was previously convicted of the same crimes almost 17 years ago. He served 18 months in prison for those crimes.

Maruding’s licence has been handed over to authorities until his case is finalised. This means the former taxi and truck driver will have no way of making an income for some months to come.

NOTE: This article first appeared on The Citizen website on November 11, 2014.

The  NPA has officially withdrawn the charges against Zamokuhle Mbatha, the 25-year-old man accused of killing Senzo Meyiwa.

Mbatha had his second appearance in the Boksburg Magistrates Court on Tuesday morning and the charges of murder and robbery were dropped against him within five minutes.

It became apparent why when Magistrate Daniel Thulare accepted the State’s request to withdraw the charges.Thulare said there was not enough evidence against Mbatha to carry on with his trial.

Mbatha’s family, who filled two benches in the packed court room, were overjoyed. Lindiwe Mbatha, his sister-in-law, said: “We knew they had the wrong person. He would never do something like this”.

The family left the court in song.

Mbatha will be released from police custody and investigations into Meyiwa’s killing will continue.

NOTE: This article first appeared on The Citizen website on October 22, 2014.

The driver behind the wheel of the truck which caused last week’s horror accident on the N12 highway is planning to plead not guilty.

Appearing for the second time at the Palm Ridge Magistrates Court on Wednesday, Isaac Wade Maruding said in an affidavit that he was not responsible for the crash.

Maruding, driving a truck owned by Benusi Cargo Carriers, plowed through numerous vehicles on the highway when the truck’s brakes allegedly failed on October 14.

In the same affidavit, Maruding apologised to those injured and their families.

Mokhele Salemane, Maruding’s new legal representative, proposed his client br granted R5 000 bail on the grounds that by being detained he was losing income and could not support his family of three – two children and his wife.

Phokungwane said Maruding was aquitted of culpable homicide in 1996. He was a taxi driver at the time. 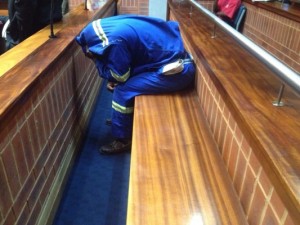 State witness and investigating officer Joas Pheagne Phokungwane said investigations were underway on the vehicle and would be concluded next week.

Ntuli used this as another reason for Maruding not to get bail.

“No bail is set at this stage and the accused will remain in custody,” he said.The truck was impounded by police.

NOTE: Article first appeared on The Citizen website on October 16, 2014.

The driver of the truck that ploughed into close to 50 cars on the N12 on the East Rand on Tuesday, was left in the lurch by his legal representatives at Palm Ridge Magistrates’ Court on Thursday afternoon.

Truck driver Isaac Maruding had his first appearance in court on Thursday. State attorney, John Ntuli applied for a postponement of the case to investigate further.

Maruding, facing four counts of culpable homicide and one count of reckless and negligent driving, covered his face throughout proceedings.  His representatives, advocate Gerhard Louw and Deon van Staden initially opposed the postponement, wanting to proceed with Maruding’s bail application.

When Magistrate Samuel Hlubi denied the defences application,  Louw asked to be withdrawn as his client’s representative. “We don’t have instruction to proceed with this case beyond today,” Louw said.

Maruding has a previous conviction for both culpable homicide and reckless and negligent driving, and served time in prison for both, the court heard.

The state asked for more time to properly compile information on those who died in the crash, Ntuli saying “additional charges” may be added in future.

Hlubi postponed the matter until October 22, to give both the state and Maruding the time they need.

Maruding now has to find alternative legal representation after the company appointed lawyers dumped him on Thursday. 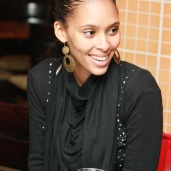 I should be writing a news feature right now, but the task seems impossibly daunting as the deadline draws ever closer.

We had our first crack writing the intro to a feature earlier in the week, which served as some sort of prep for this. We all had to interview our partners  and write up a scene setter from what they had told us. Learnt so many entertaining and heart-breaking things about my colleagues. Thus far that has been one of my favourite feature writing classes.

Getting stuck into the paper proved difficult this week, you know with it being an 8 pager and all. Somehow things always take longer when we have less pages to fill. Makes no sense but yeah that’s how things seem to go.

Scribbled two things for the paper – two informational pieces. Production was a bit more tense than usual but all of that was long forgotten later that evening at our Court Reporting party.

We had Court Week earlier in the year, a week that was somewhat of a rollercoaster. Drinking before writing our stories seemed to be one of the best things most of us could have done – this alternative method making for some peoples best writing.

We officially became ‘award winning’ journalists that evening – must say it felt so nice. I realised then that I might be doing the best Honours course in the world and also that the people I am doing it with are beyond awesome.

This coming week is going to be rather adventurous, going to Oppikoppi with a colleague – things might get messy, but not too messy for us to capture the whole thing through our lenses and pens. But before the fun begins, I have to write this feature and help put a whole paper together.