Literally. I went to Edinburgh, Scotland over the winter/Christmas break and the one and the only thing I wanted to do when I got there, was see where the magic happened. The locations, monuments and scenery that were the backdrop that provided J.K Rowling with the inspiration to finish writing the Harry Potter series.

So the first order of business when I arrived was finding a walking tour that would show us all these places. I booked a two hour guided tour with GetYourGuide and let me tell you it was the best 12 pounds I have ever spent.

As you can tell, I am a Potterhead – a big one. So much so that when the little walking group I joined was sorted into our wizarding classes I was classified as a Death Eater because I answered yes when asked if I believe only people who had read (and reread) the books and watched (and rewatched) the movies was a true fan – I mean duh. But shortly before that, we had been sorted into houses and the “sorting hat” placed me in Gryffindor– so a bit of a tricky one but we move.

The tour started off in a place that needed very little explaining to the group – Greyfrair’s Kirkyard – the actual graveyard that inspired the (traumatic) scenes from the Little Hangleton Graveyard in Harry Potter and the Goblet of Fire, where we last saw Cedrick Diggory alive (sniffle). Apparently, a mixture of those grey turned black headstones, the names on those headstones and a deep depression inspired Rowling to write some of the most iconic characters and scenes for the series. 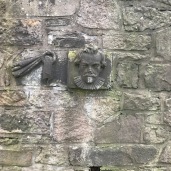 She spent days looking into the graveyard from a window at a nearby cafe, the Elephant Cafe and walking in it to keep building on the story she had started writing on a train years earlier about the boy wizard we all came to love. Some of the engraved names I spotted on the day included one Thomas Riddell (Tom Marvolo Riddle/He Who Must Not Be Named/The Dark Lord to us), an unofficial Sirius Black one scrawled on the wall with spraypaint on an unmarked grave and even a little statue that looked exactly like Nearly Headless Nick. Just next to us was a very Hogwarts looking school, George Heriot’s School (circle on left), this building and the Edinburgh Castle (circle on right) a short walk away were reimagined to become the school of witchcraft and wizardry we all wanted to go to.

What struck me most in that graveyard (and along the rest of the route really) is the sheer will to press on, in the face of loss and failure, she just kept writing, making space for the process in every free minute of every single day. Picking up the pieces of a broken and grieving heart, raising a baby, studying and trying to survive didn’t get in the way of writing a chapter or two when she could find a quiet enough spot to do so. And to do that and manage to write one of the best book series of all time feels surreal, but one thing it also left me with is the fact that it is possible if you show up for yourself and believe in the things you are actively pursuing. And I believe it is that quality that allowed her to see and harness everything around her so beautifully and craft it into the story of Harry Potter. There are pieces and places that seemed so familiar to me all around Edinburgh because of the way she managed to weave the places and names into her work. I know it will sound cliche, especially in this context, but it was a true and simple lesson of the magic of commitment and determination. I hope to one day harness and live out this lesson.