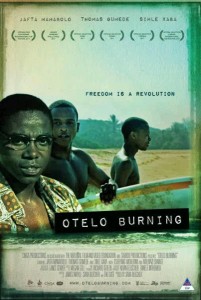 I got the opportunity to attend a private screening of this movie on the 11th of April 2012. As soon as we got there, we realised that this movie is a big deal.

As I stood in the line to get popcorn, I was losing my mind at the sight in front of me. Lungile Radu was standing there. Right there, in real life. Not on a television screen. Less than 2 meters away from me. Then just as I got over that excitement I see Jafta Mamabolo who is the leading man in the movie. This was indeed a big night. As I look up from tweeting about my celeb spotting, Ferial Haffajee just casually struts past us. But I digress.

It was a small viewing space, packed with a number of seemingly intimidating people. The movie started off with an intense scene that grabbed all my attention from that moment, right until the closing credits. I really don’t want to give anything away on this one. We should all go out and watch it. What I will say is this: it’s a very different view of the South Africa of the late 1980s/early 1990s. It effectively shows how the apartheid regime managed to seep into all epithets of not only political but social life at the time. It was an inescapable force that incinerated everything it touched. 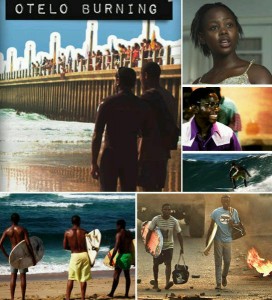 It is a movie about freedom. How freedom has multiple meanings and that the attainment thereof is never easy. Tragedy is etched on the face of freedom and vice versa; the two are inextricably intertwined. It has elements of a variety of genres which makes it the rich movie it is. We laughed (a lot), we cried (a lot) but most importantly, everyone in attendance thoroughly enjoyed themselves. It must be said that the acting was amazing. It wouldn’t be as brilliant without that amazing cast. A most compelling performance was given by all and they rightly deserve all the awards that are sure to come their way.

We have so much talent in this country. The only way to nurture it is to support it. So do the right thing and go watch this awesome movie. It will be in cinemas from May 11. There is already an enormous buzz around the movie. It hasn’t even come out yet! Go watch it, you won’t regret it