The past seven days have been jam packed and felt more like two weeks than one.

Our lives got much busier when we were told that we had to put another 12 page paper together.  Personally I was excited, a 12 pager gives us more room to ‘play’ and deliver more copy. Were it not for the 12 pager we would not have been able to do this photo spread: 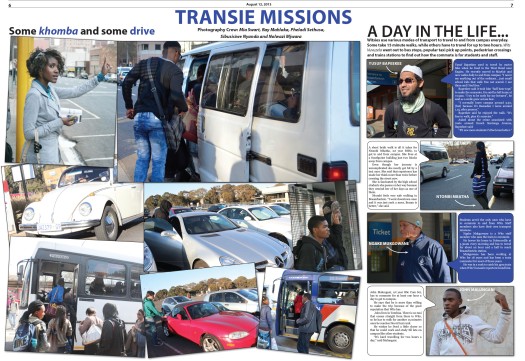 Doing a spread this time was a little more difficult because most people just didn’t want to be photographed. But eventually the rejections started bouncing off of us and we managed to get the above shots, and tie in little stories on the side.

Somewhere in between chasing down people for these photo’s and preparing myself for Oppikoppi, I wrote my first football story. Well to call it a story would be a stretch, it was more of a score update than anything else, but alas a football piece nonetheless. Read it here: Scoring boots lift Wits

We also handed in our first submissions for feature writing. We were tasked with writing news features, I would put it up but it was terrible so maybe I’ll put up the next one.

I am enjoying feature writing a whole lot, especially because it really gives one the opportunity to ‘play’ wit their words a bit. Our guest speaker for the week was Toby Shapshak, editor of Stuff magazine, He was a riot.

Every guest lecture we have makes me want to delve deeper into the deep, murky waters of features. Just this morning we had Mia Malan from the Mail & Guardian come in to talk about health features – her stories alone left us all in awe of the power of feature writing.

If you give my blog half a glance you’ll know that I went to my first Oppikoppi festival as well this past week, the posts are all over my blogs and there is still more to come. I have loads of pictures to edit and notes to go through, but this is definitely one of my faves that I have managed to edit so far and as such is winner of “Snap of the week”

In much more exciting news I get to be the editor this week, yays! Hope to deliver an absolutely awesome newspaper this week, wish me (us) luck 🙂