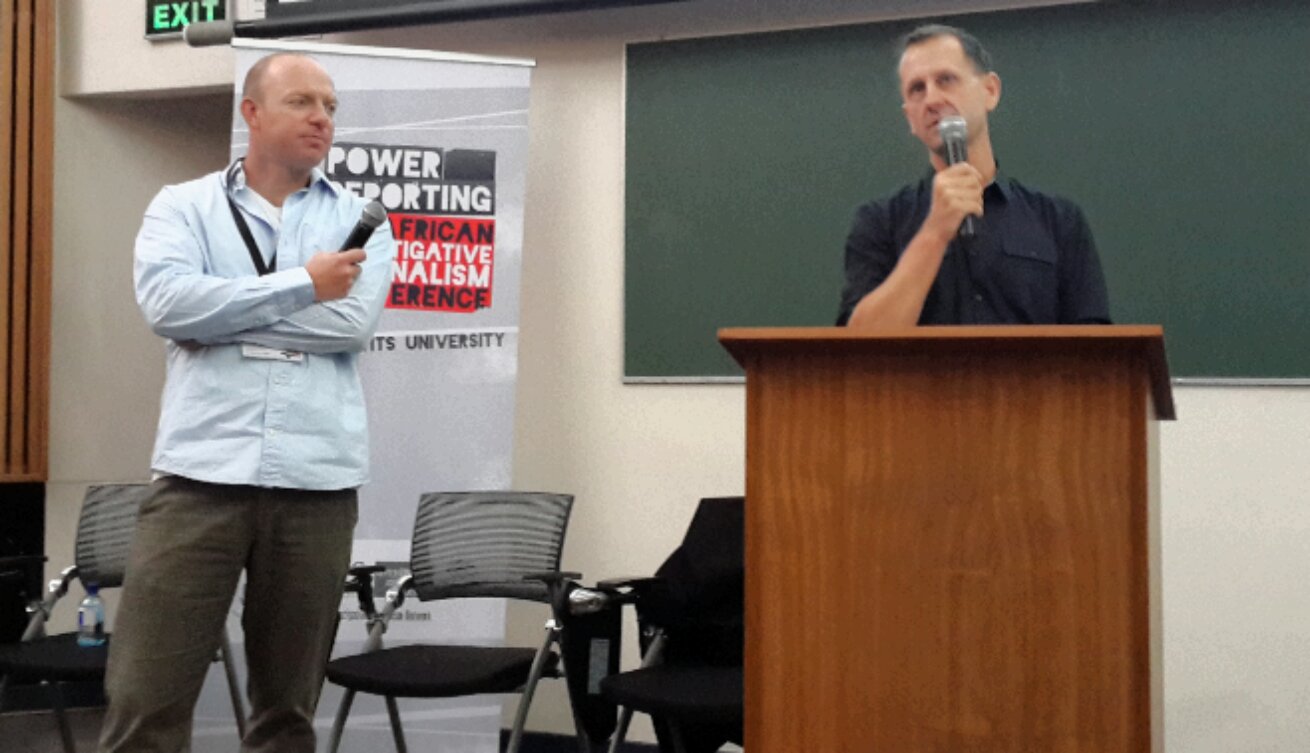 Reporting in war zones of conflict areas can be dangerous for any investigative journalist or photo journalist. Stephen Hofstatter and James Oatway presented ways to stay safe and navigate such areas in ways that will help to get the story a journalist is looking for and stay alive at the same time.

Hofstatter and Oatway have worked together in the Democratic Republic of Congo and in the Central African Republic (CAR) on stories that have seen the two dodging bombs and confronted by armed rebels. Their presentation on Covering Resource Conflict in Africa started off with Hofstatter outlining the essential and practical considerations they had taken when they went into conflict areas. He said that in conflict areas it’s difficult to sift between fact and fiction because of the amount of propaganda punted by opposing sides. A lot of wire services fall prey to misinformation because they rely on once source in many cases, added Hofstatter.

The pair used their stories to highlight some of the do’s and don’ts involved in covering conflict areas:

• Budget: The most essential things on the budget include money for a fixer, a driver and accommodation. Hofstatter said that they used up to $250 a day on a trip. Oatway added that while some news agencies had big enough budgets to include security, this presents a challenge when trying to get close to sources and getting a more in-depth story.

• The right fixer: A dependable and professional fixer is essential to survival in conflict areas said Oatway. Fixers are people who can put you in touch with military commanders and bureaucrats because they have nurtured relationships with these people. Fixers can help in attaining exclusive footage because they can navigate around difficult situations and people. · Background: “It’s difficult to get information when you get there,” this is why journalists need to do all their homework beforehand said Hofstatter. A lot of senior officials and business officials from other African countries live in South Africa, they can be very useful sources.

• Angles: While it is important to present a South African angle when reporting, it is equally important to avoid being insular by ignoring international angles. Hofstatter used an anecdote of their experience with rebel commanders in the CAR to illustrate this. “We didn’t just cover the conflict there (in CAR)…We had to show what kind of regime our government was propping up,” said Hofstatter.

• Ethical considerations: In such volatile areas, one can witness grave human rights abuses. The pair tried where they could to make ethical and morally sound decisions where both information and images were concerned. Oatway vividly recalled a situation where they pleaded with rebels to release a prisoner they had in their custody after he had taken the shots he needed but added, “I have no idea what happened to him after we left.”

• Balanced reporting under fire: Again Hofstatter stressed the importance of avoiding falling for propaganda. “Where you can highlight unverified information and highlight where you got that information.” Images and information with grey areas can create false negative narratives.

• Safety first: Oatway said that even though he itched for “iconic photos” when there is a lot of action happening, he sometimes has to ignore scratching that itch by staying away from extremely risky situations. Hofstatter went on to list things to do in the face of gunfire or hand grenades going off, “make yourself as small as possible and lie on your back,” he said.