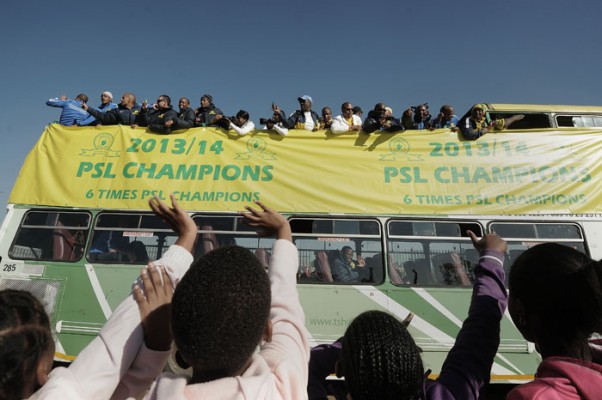 NOTE: Article first appeared in The Citizen newspaper on May 17, 2014.

More than 1 500 primary and secondary school learners in Nellmapius, Mamelodi, screamed their lungs out as an open double-decker bus filled with Mamelodi Sundowns players made its way through the township.

The victory parade didn’t stop for the excited learners, but this did little to dampen the enthusiasm.

Sundowns – also called the Brazilians for their club colours – won this year’s Absa Premiership league for the first time in the seven years and hosted the parade yesterday to celebrate.

“It’s the first time our kids (Sundowns) bring the cup home. We are proud of them for flying Pretoria’s flag high,” said Peggy Basaya, a cleaner at Nellmapius Secondary School.

The primary school’s pupils were in high spirits before the parade, running to the sides of the street in anticipation, singing and dancing as they waited.

Sundowns gave T-shirts to pupils in the school’s netball and football teams, but the pupils from both schools got an opportunity to watch the parade.

Led by metro police officers on motorbikes, the bus made its way down the street. Players waved and held the trophy over the side of the bus.

Grade three teacher Louise Phakula said she was extremely “happy and proud” to be a Sundowns supporter and could not wait to see Teko Modise. Modise came up as a crowd favourite. Fifteen-year-old Mpho Modiba said: “I wish I could marry him. Did you see how good he looked on that bus?”

With over 50 places on the parade route, the team could not stop to interact with fans, leading to many running after the bus once it had passed them by.

Mosebo Sethoga found this regrettable: “I wish they had stopped. My kids were so excited and wanted to meet them.”

The only stops the parade bus made were at the Tshwane University of Technology and the last stop, Sammy Marks Square, where the championship trophy was handed over to the executive mayor of Tshwane, Kgoosientso Ramokgopa.