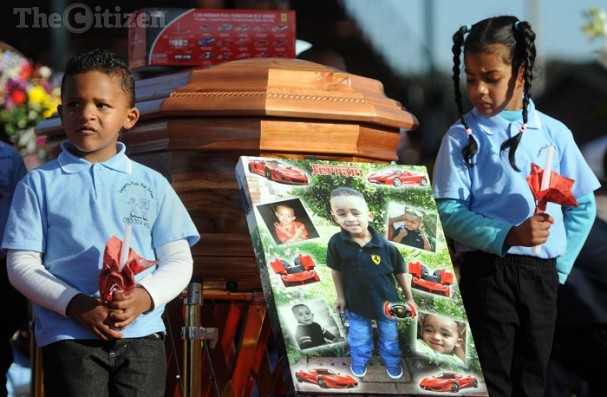 NOTE: Article first appeared on The Citizen website on July 26, 2014.

A funeral service fit for a hero was given to Taegrin Morris this morning at W. J Clement stadium in Reigar Park, Boksburg.

The community gathered in their numbers to mourn the boy. Many wearing t-shirts with little Taegrin’s smiling face on the front of them, with the words “genoeg is genoeg” in red print.

Taegrin died after being dragged from a car for several kilometres when his mother’s car was hijacked last Saturday evening.

His tiny brown coffin was guarded by classmates from Geppetto Pre Primary school, who held lit candles in honour of him.

“We’re deeply hurt by the manner in which the heartless killers took his life,” he said.

Makhura drew much cheer and applause when he promised the community that the criminals responsible would be found and driven out of the community.

He added that “coloured communities have been marginalised for too long,” saying a change in that paradigm was needed in Reiger Park.

Lizzie Phike – whose son was kidnapped last week when her husband was hijacked in Bronkhorstspruit – was in attendance to support the Morris family.

“They weren’t as lucky as me and I am to say sorry for that. I am hurt by what happened because the same thing could have happened to my boy,” said Phike.

In a final show of strength Taegrin’s mother, Chantel Morris decided to make the vote of thanks on behalf of her family. “If it were not for your prayers this week, we would not have made it,” she said.

Taegrin was laid to rest at the new cemeteries in Van Dyk Park in Boksburg. The entire service was paid for by provincial government.