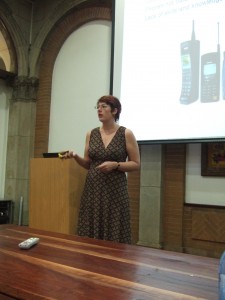 exPress imPress hosted its second roundtable discussion on the 11th of May 2012. The topic for discussion was: ‘Digital Apartheid: Is the smartphone age segregating or uniting South Africans?’.

The Graduate Seminar Room was not as full as we had anticipated but there was an eager audience present and ready to engage with the topic at hand. The first speaker was the ‘headliner’ if you will: Nathalie Hyde-Clarke. She is an ex-Witsie who is now the Head of the School of Communication at the University of Johannesburg. Her presentation was based on a research study she had recently done on trends of mobile phone usage in the Greater Johannesburg area. Her findings were very illuminating and served to debunk some assumptions about mobile phone and smartphone usage that I had.

Her findings could be summarised as follows. In 2010, 85 percent of the South African population owned a cell phone, with around 35 percent of those using their phones to go online. By 2012, there was a major increase in these numbers with 35 million people owning cellphones and 36 percent of those being smartphones. She found that people do not really use their smartphones to their full capacity. Most people use it for social networking and entertainment purposes which is problematic as a large number of people who own phones do not really know how to use them properly – smartphone or otherwise. Hence, the lack of mobile phone literacy was a problem that she identified in her research. There are no classes to learn how to use a phone. Most people just learn as they go along which is not an altogether bad thing but for example for someone who lives in a rural area and is illiterate, this could prove to be a trying task.

Nathalie made a statement about the teenagers and kids of today missing out on the world due to their preoccupation with their phone. It was only fitting to have a representative of the youth to challenge this. Leenesha Pather, a fellow exPress imPress blogger and Media Studies Honours student, attributed the growth of smartphone usage to affordability. Blackberries often come with a R60 internet bundle which effectively soothes the airtime woes of many ‘broke’ youngsters. She did mention that while accessibility had increased, smartphones serve to segregate people on a physical level in the sense that people would rather text, BBM or tweet one another than actually go out for a coffee together, hereby not quite countering Nathalie’s point (as I had hoped) but supporting it. But in the same breath, Leenesha mentioned that perhaps if everybody had access to smartphones, race and class divisions could be bridged. 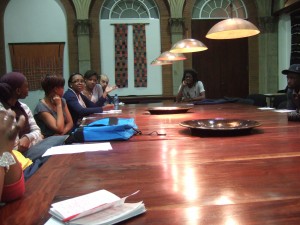 Following Leenesha, Wendy Willems, a lecturer and now Head of Department of Media Studies at Wits University, spoke. She has been doing research in Zambia on mobile phone usage. She mentioned that patterns of ownership and cost are very similar to the earlier mentioned South African case. People who cannot afford these technologies are ‘left behind’ and this creates a burgeoning digital divide. In Zambia, people attribute mobile phones to a number of social problems like adultery. A lot of people seem to think that mobile phones break up happy homes.

In the discussion held afterwards, the debate echoed ease of access in Africa and questioned how reflective the findings actually are of places outside Greater Johannesburg. Along with this, there was a shared sentiment that smartphones need to be made more affordable, used as more than accessories and used to their full potential. If this happened they could be used as educational tools and really help to put the world at everyone’s finger tips.