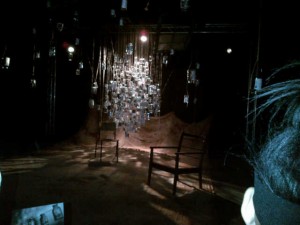 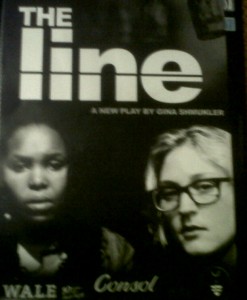 This year the Wits Arts and Literature Experience (WALE) had a number of interesting events on offer. Of all the events I managed to attend, one in particular stood out. I wouldn’t call this piece a review but rather an abstruse comment on the play.It was a fairly warm and pleasant afternoon, the 10th of May 2012. This changed completely when we were ushered into the Nunnery. A Wits theatre space which has quite an eerie feel to it. It felt like we had just walked into a dungeon. This was cemented when the huge black doors where bolted shut for the performance to begin. The lights were dimmed, all whispers faded and The Line began.

It was an amazing play to watch. Even though it only ran for 50 minutes, one was not left wanting. The storyline was robust, intricate and full of devastating truths. Truths about who we are as so called South African citizens. Citizens who are so caught up in the ideas of their superior nationality that they burn, torture and destroy the lives of their fellow brothers and sisters. The play was primarily about the heinous acts committed during the xenophobic attacks in South Africa in 2008.

The script and most of the dialogue in the play was made up by a number of interviews conducted by the director, Gina Shumulker. This made for a far more transparent and sincere opportunity to identify with the characters. There were only two actors (Khutso Green and Gabi Harris) on stage but they managed to tell the stories of several interviewees. Ms Green played five vastly different characters. Just by changing her voice and mannerisms, she managed to play each character with spellbinding conviction. Her physical appearance was but a mirage on that stage. We ‘saw’ a different character every time she opened her mouth.

We got an insight into the kinds of people who propelled the violence, in this case an ANC councillor, a young thug and a

woman who was a victim of the hype incited by mob mentality. We got to see people who just stood by and watched, stopping only to take photographs (people like us). But most importantly we got to see the victims of the xenophobic violence. The innocent people we all let down.

There was a discussion after the play. Most of the audience members were moved by the performance. Moved in that they had never taken the xenophobic attitudes and actions seriously up until this point. There was a common feel around the room that the time of shifting the responsibility of dealing with such issues to government is over. The onus is on us as individuals to say to one another that ‘this is wrong and we will not tolerate it’. We can’t stand back anymore and watch such atrocities take place right under our noses. There are a lot of things that we put up with and ‘let slide’. The killing of innocent people should not be one of them.

The Line left me feeling guilty and ashamed. Ashamed of being a South African citizen and guilty in my complicity of inaction. However, there was a trickle of hope in all of this. There was a character who was involved in the violence who was rather remorseful after the fact. Her guilt is a sign that our people haven’t completely lost their humanity. That we still have the ability to feel for others, that all is not lost.